Well crafted and highly functional. The Raspberry Shake team has put together a great project for citizen scientists.

Today, I received my Raspberry Shake (an inexpensive professional grade personal seismograph) that uses a Raspberry Pi for data collection, processing, and uploading data (if you choose to share seismic data with the world).

It took only a few minutes to assemble everything and to get the Shake reporting seismographic activity. I was expecting to spend a few hours tweaking the software to get things operating, but was very happy to see that everything worked out-of-the-box. The OS image provided booted the Pi and I was able to go to a browser and configure the Shake. I was up and running in minutes. Kudos to the team for getting things right.

The quality of the printed circuit board and the enclosure is suburb and it was very easy to assemble the kit. The only thing I needed was a Raspberry Pi, power supply, and Phillips screwdriver The team has prepared a number of videos showing how easy it is to get the Shake up and running.

The software is very good, but has a few (only a few) rough edges. For instance, only Chrome is able to display all of the graphics properly and IE isn’t supported. This isn’t an issue for me, but it might be for others. In all fairness to the team, getting interactive displays to work properly across browsers can be very difficult. For a v1.0 release, the software is much better than one would normally expect.

Because of where I have the Shake located in the interim, I’m not sure how much noise I will get with foot traffic. However, I am planning on siting the unit in a quieter area of the home. I will know more after collecting data, but so far, everything is working as expected.

Raspberry Shake was funded as Kickstarter project and managed to deliver on-time along with additional software functionality. The team is dedicated to setting up a world-wide network of personal seismographs and has built a great measuring and reporting solution.

I can’t say enough about the team’s dedication and enthusiasm. More information about the project is located on the Raspberry Shake site.

The unit is very sensitive, but selective. The unit is currently situated on a poured concrete floor off of the garage and it can easily detect movement anywhere in the house while rejecting a washing machine in spin cycle located in the next room or the furnace fan.

Here is a graph of the first day and a half of use. 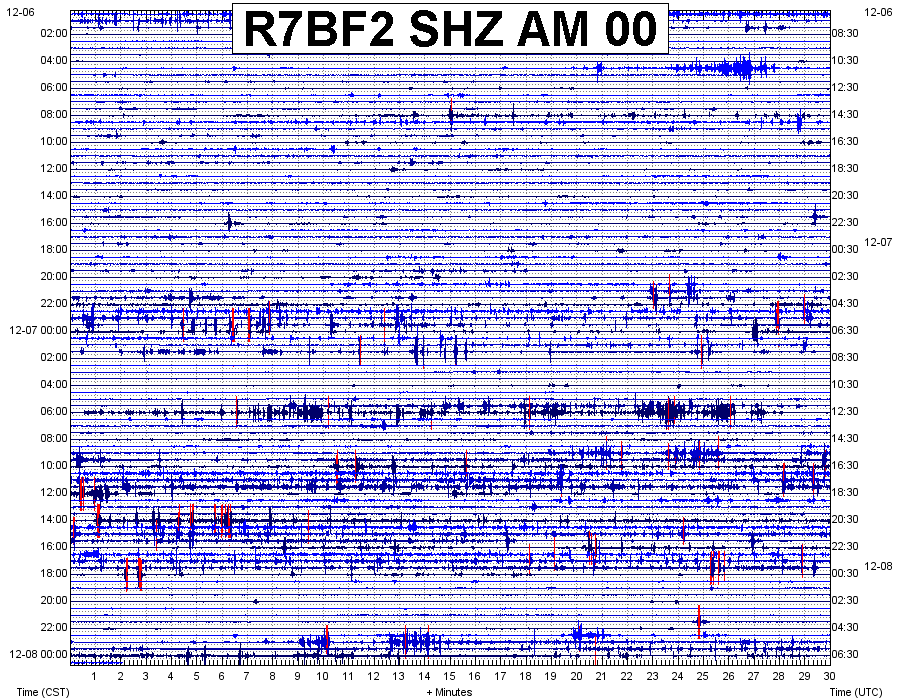