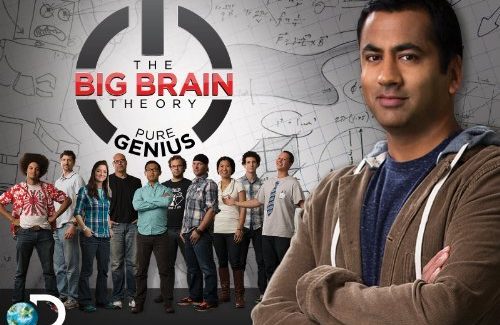 Last night the finale of “The Big Brain Theory – Pure Genius” aired on the Discovery Channel with a bridge building challenge for the remaining two contestants. The program, hosted by Kal Penn, is a team-based engineering competition where the winner at the end of the series receives $50,000 and a one year contract with WET Design. The series features ten very bright and creative engineering types who are all initially eligible to win the grand prize, but can eliminated from the competition by the judges.

Each week a new challenge is presented and the remaining eligible contestants pitch their ideas to the judges. The judges chose the top two designs, Red and Blue teams are formed, and the teams go off for the build. At the end of the 3-4 day build time, the teams present their creations to the judges who chose the winning team and a contestant to be eliminated from the losing team.  As all of the eliminated contestants remain as a part of the pool available for the build teams, interesting team dynamics can develop.

What makes all of this interesting to me is that the contestants are representative of many of the bright engineering types that I’ve encountered during my career and seeing them all work or attempt to work together can be very enlightening. All of the major role types found in group dynamics are represented in one form or another including the Initiator, Encourager, Dominator, Consensus Builder, It’s All About Me and My Ideas, Quiet and Reliable, Rebel, and the passive aggressive who will say one thing to you and another thing behind your back.

You can also gain insight from the management side of things by observing how the judges, representing management, view the team’s dynamic and their opinions about how the teams perform. The first takeaway is that many bright engineering types are not initially comfortable being leaders. The natural preference is to create and be doers. Taking a leadership role is secondary to most and often unwelcome.

There are two areas where the judge’s expectations about leadership differ from what I believe are more effective approaches.

The first example was the judges’ criticism about the way a team leader handled a team member who was being difficult and disruptive. One of the contestants came across as being a person with, shall I say, an anger management problem. I would expect that if he behaved in the same manner at most organizations, he would have already been fired or at least been on a first name basis with the HR staff supervising his improvement plan. After several outbursts that were disrupting the team’s ability to work effectively, Gui, the team leader calmly asked this person to remove himself from the build. From a psychological viewpoint, this was exactly the correct and healthy course of action. However, the judges felt that Gui could have done more to mitigate the situation and find a way to make it all work, and by losing the resources of this team member the team suffered.

The second area that surprised me was how the judges seemed to view consensus building as a sign of weak leadership. Over the course of a number of builds, the aforementioned person with an anger problem contributed to the creation of a negative environment, eroding the trust between team members. During one episode, it so happened that both team leaders, Amy and Allison, were consensus builders. Each began their builds with a session to hear the ideas and opinions about their design from other team members before committing to the actual build approach. Although excessive design-by-committee and trying to incorporate everyone’s ideas can lead to analysis paralysis and project failure, it was clear that the both teams operated in a more harmonious fashion and both teams met the challenge objectives, causing the judges to choose which of the two successful builds would be winner. It was Amy’s project that won and Allison, the opposing team’s leader, that was chosen by the judges as the weakest link and eliminated from the competition. Common sense and experience says that a team member who feels heard is a happy and productive team member. Leaders who prefer to drive their agenda without attempting to get buy-in or understanding from their teams are almost always ineffective in the long run and the team and project suffers.

Big Brain Theory is interesting enough with the engineering challenges presented, but if you work in a team setting or manage teams, much can be learned from how these contestants interact with other and the consequences, both good and bad.  I recommend that you catch the series when it airs again on Discovery.